I have been presenting during VMware Partner Exchange in Singapore as well in certain workshops for customer and many times we brought up vSphere App HA as part of application availability solution which is part of vSphere Enterprise Plus.

Previously with the 1.0 release, I did a post on the setup but it slip from my mind that there was an minor update to 1.1 on 8th April 2014 which I forgotten to update here which I find it pretty useful.  Do check out my previous post to have a better understanding.  The setup does not change much.

In 1.0, it only support vSphere web client 5.5 and using vCenter Hyperic 5.7.  With the release of 1.1, it will now support from vSphere 5.1 U2 and creation of custom service where it is non default applications in vSphere App HA.  Lastly the pain in 1.0 of not able to edit a policy after it is created it now possible.  Finally this is fixed else you would need to delete and re-create a policy due to minor changes and reapply to all the VM involved!

The only draw back on this release is there is no direct in place upgrade from 1.0 to 1.1, you would need to redeploy your App HA appliance.  For vCenter Hyperic, it is now supporting 5.8.1, so you might want to either upgrade it or redeploy it.

To add a custom service, you will first discover the "Server" in vCenter Hyperic.  Note down the name of the service as above.  Next you would need to SSH to vSphere App HA appliance.  To do that, you would need to enable SSH Permit root access if you are accessing via a SSH client otherwise you can just proceed from the vSphere web client remote console.

Once completed, you will see your service name available when creating a policy. You will also see the status as AppHA-Custom.  You can refer to the vSphere App HA user guide page 20.

Hope this is useful for those using vSphere App HA. 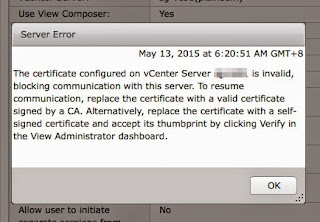